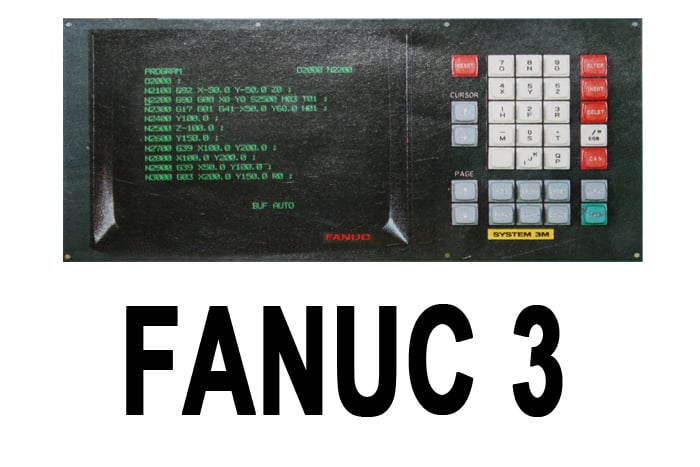 CNC-Shopping is offering you online FANUC 3 Spare parts (Fanuc 3M, Fanuc 3T, Fanuc 3TF, Fanuc 3MF and other Fanuc 3A, 3B, 3C series) for your CNC Machine. You can browse below our FANUC 3 Control system parts such as FANUC 3 control boards PCB, graphic boards, axis boards, BMU board, Fanuc 3 master board, Fanuc 3 operator panel and keyboard, Fuses and Fanuc 3 monitors.We have a FANUC 3 test rig to test all of our FANUC 3 parts
FANUC System 3 has been developed as a high-accuracy, high performance fixed-software CNC for turning or milling machines to meet the needs in the world's market. Its control circuit fully uses high speed microprocessors with RS232C interface, custom LSIs, and FUJI Electric semiconductors to enhance reliability and significantly improve the cost/performance ratio. Fanuc 3 control is a closed-loop CNC using the FANUC DC Servo motor M series uniquely developed by FANUC and also using a high performance FANUC pulse encoder as the detector Fanuc 3 CNC incorporates a self diagnostic function and provides very easy maintenance referring to FANUC 3 manual. FANUC 3 is designated to be assembled inside an NC Machine tool. A dustproof enclosed structure, a cooling method, and wiring between units are designed by each machine builder.

Page
Set Descending Direction
Shop By
Shopping Options Filter by
Type of product
Price
State of wear
Availability
Can not find what you are looking for ? Contact us

Based on your location, you should redirect to other store. Click bellow to get redirected.
Redirect
I wish to continue my navigation
Back
to top