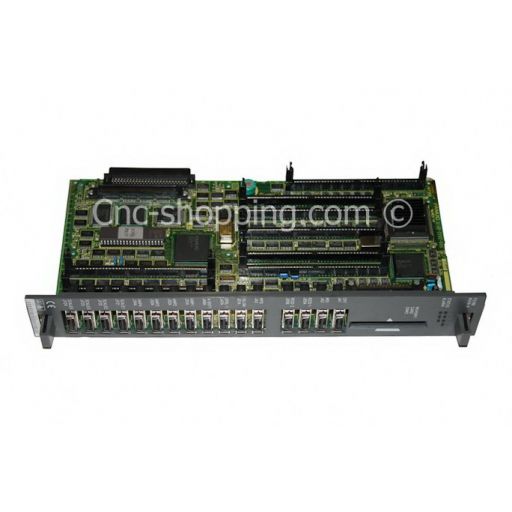 Details
FANUC A16B-2202-0860 Master board for sale from FANUC 18 Model B Control series (Fanuc 18-MB, Fanuc 18-TB). FANUC Main cpu pcb (4 axis) ready to install on your Fanuc 18 CNC Control and replace your FANUC Defective mainboard of your CNC Machine. This FANUC A16B-2202-0860 board comes with a warranty, the warranty period and warranty type is listed below.

A heat sink is an object that transfers thermal energy from a higher temperature to a lower temperature fluid medium on a FANUC CPU installed on a Fanuc mainboard. The fluid medium is frequently air, but can also be water or in the case of heat exchangers. If the fluid medium is water, the 'heat sink' is frequently called a cold plate. To understand the principle of a heat sink, consider Fourier's law of heat conduction. Joseph Fourier was a French mathematician who made important contributions to the analytical treatment of heat conduction, as published. Fourier's law of heat conduction, simplified to a one-dimensional form in the x-direction, shows that when there is a temperature gradient in a body, heat will be transferred from the higher temperature region to the lower temperature region. A16B-2202-0860
More Information
Delivery options
Express delivery to 220 countries
Standard delivery to 72 countries